Walhalla – It sounds a bit odd for an Australian place, in fact Walhalla was named by its Scandinavian mine manager after “Walhalla” in Norse mythology – The Valley of the Gods.

Walhalla is a beautiful place, in the middle of the mountains, about 180 km from Melbourne, once well known for its gold mine. Here you can find some facts.

It was my first time in a real gold mine, I really enjoyed it, so did my kids, very curious of knowing the whyS, whereS, ifS… the mine was cold and dark and I can’t even imagine how hard it must have been for workers to spend most of their days there. 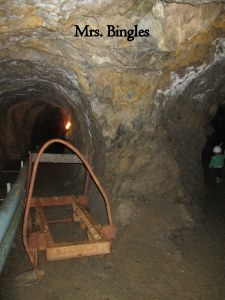 At the beginning of the 20th century a railway was built to improve the transport of material for and from the gold mine as well as people.

My little Mister Copycat couldn’t wait to have a ride on the fabulous steam train and I must admit, I loved it too. The scenery is simply gorgeous! 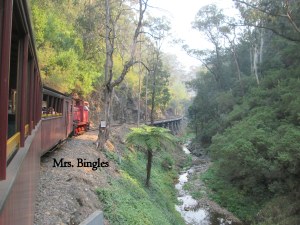 On our way to Walhalla, we visited one of the old railway bridges, really stunning: 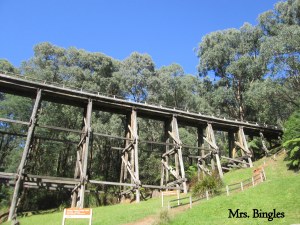 and we passed by a beautiful blue lake: 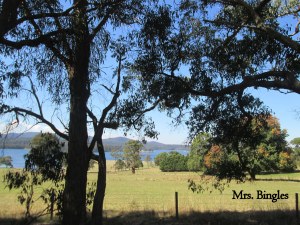 I would recommend any family to go and visit this historical place, it’s such a golden experience!

During assembly at school I found out that there would be no school next Monday. Everyone seemed to know why apart from me. WHY? What are we celebrating now?

Looking at the school calendar I found out that here, in Melbourne (Victoria), the second Monday of March is being celebrated labor day.

Now, being an expat means this too: you get confused with important dates and public holidays.

I wanted to know more about why here they have a different date to celebrate this event and I learnt from Wikipedia that:

Very interesting fact but this still doesn’t explain why they celebrate it in March.

Anyway, I’m glad someone fought for us, so that we could have every day

I’m just wondering if us parents could ask for the same rules to be  applied to our lives.

“A fortunate life” by A.B. Facey is the first autobiography I have ever read and to tell the truth it happened accidentally, while I was browsing in my local library, this book happened to appear under my eyes.

I’ve been attracted by the title and decided to give it a go.

It’s written in a very simple way, yet intriguing. I couldn’t stop reading it.

This man was born in Australia just before the 20th century and his life has been so busy  that you can learn the Australian 20th century history by reading all the facts that happened to him, from his troubled childhood, to starting to work at a very young age, to taking part in WWI in Gallipoli.

A few days after the armistice we received some trench comfort parcels from home […] I was the only person in my section to get socks […] I found a note rolled up in my socks and it read: “We wish the soldier that gets this parcel the best of luck and health and a safe return home to his loved ones when the war is over.

I truly enjoyed reading every aspect of his life and it’s been easy for me imagining what Australia was like before I was born.

I also found something about rabbits which reminded me of the bollards seen in Geelong.

Now to top all that was the rabbit-plague – they came in thousands. They not only destroyed our crops, they also took acid grass and stock food out of our paddocks to such an extent that the sheep and cattle were unable to get sufficient acid food to make the stomach work to digest the food.

In the last chapter I read something that made me feel closer to this man even if our lives have nothing in common:

I have never ever felt like I was tied down to any one place or any job. I have always felt that I could sell out or walk off at any time. It didn’t matter. I never ever worried about trying something different or having a go at something. I have always believed that if you want to do something you usually can.

Such a positive way of living a not always easy life.

During the weekend we decided to have a little trip just out Melbourne. Our Little Mr. Copycat is a big train fan (will he ever get out of this phase? I hope soon!) so we thought we could spend up to 90 minutes on trains. He was very, VERY excited! When the train left the station he started shouting choo-choo and moving his arms in a train motion (if you know what I mean). I was not that excited and after only 10 minutes I wished I could move to another carriage (on my own!).

When we arrived at our final destination I couldn’t wait to get off the train, breathe fresh air and explore.

Geelong train station is a nice little station just a few minutes walk from the seaside.

When we left home we were heading to the National Wool Museum but something along the way made us change our mind. First of all the kids were hungry, so we headed towards the beach to have a picnic. Here is where everything started.

We found the first few bollards sculptures and we couldn’t help but following the waterfront to find more. 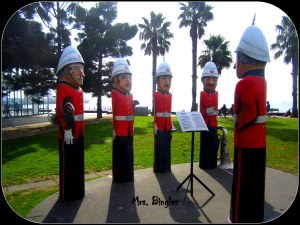 VOLUNTEER RIFLE BAND (5) Playing “The Geelong Polka”, this group represents players in Geelong’s first band concerts which were held in the Botanic Gardens in 1861.

Later I found out that in 1995 the City of Geelong commissioned the Australian artist Jan Mitchell to transform reclaimed timber pier pylons into these unique works of art.

We followed the waterfront and met many characters who played a part in Geelong’s history, from the original Indigenous inhabitants to more contemporary characters (source: http://www.onlygeelong.com.au/46369/geelong-bollards-trail). 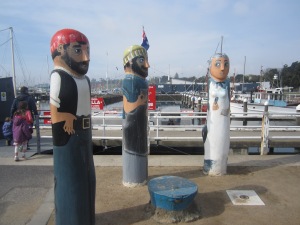 SCALLOP FISHERMEN AND WOMAN (3) From the early 1800’s, fish and crustaceans from Geelong were marketed and sold locally, as well as in Melbourne. 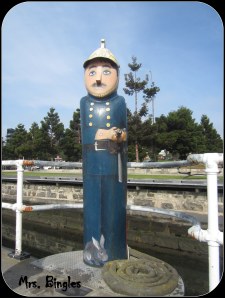 FIREMAN Established in 1854, the Geelong Volunteer Fire Brigade is represented by this figure reflecting the burning of the “Lightning” in 1869. 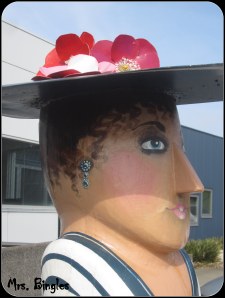 YACHT CLUB LADY Geelong’s Yacht Club was formed in 1859. The lady is holding the trophy won by “The Paddy” after racing in the first Geelong Regatta. 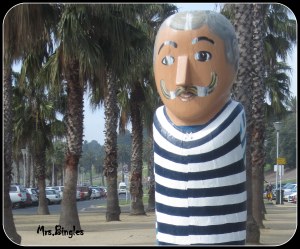 EARLY GEELONG FOOTBALLER A nearby field, which became Transvaal Square, was used for football practice. 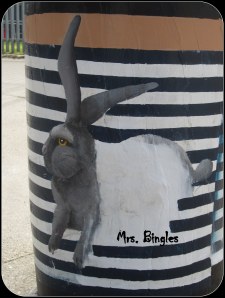 Rabbit My girls noticed rabbits painted on numerous bollards. Why??? Let’s find out!

PIERROT The Joy Ark became a hall popular for dance and roller skating in 1914 with fancy dress often featured. 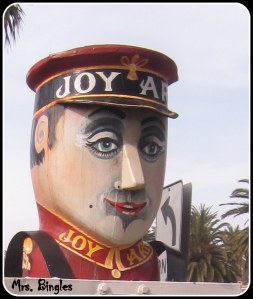 JOY ARK SANDWICH BOARD MAN This gentleman advertises the Joy Ark which was built in 1912 as a silent picture movie hall and entertainment venue. 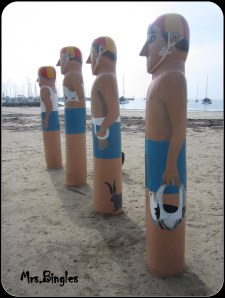 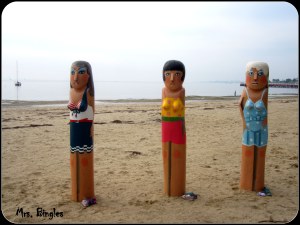 BATHING BEAUTIES (4) The beach front was the venue for beauty competitions from the 1930’s.

EASTERN BEACH LIFE SAVERS (5) Within this group there is a portrait of Billy Coyte who taught many generations of Geelong’s children to swim. 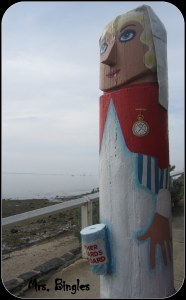 NURSE In 1932 during the Depression, the Mother Hubbard Relief Fund was set up. The Geelong Hospital was founded in 1852 near this site.

So, what about the rabbits?

We kept on looking on all the bollards and after a little while it became a game: have you spotted the rabbit? which colour is it?

I found out that the rabbits are simply a symbol of the wild rabbits introduced by the English to Australia apparently by Thomas Austin who arrived in Corio Bay in 1859 with the first pairs of rabbits for his hunting pleasure, and they bred like rabbits. Because there is no natural predator of the rabbit in Australia their population exploded. So some bright spark introduced the fox. Guess what? No natural predator for the fox either (source: http://www.onlygeelong.com.au/46369/geelong-bollards-trail).

This has been a wonderful trip full of surprises and entertainment. We learnt a bit of Australian history and art, plus had lots of family fun 🙂